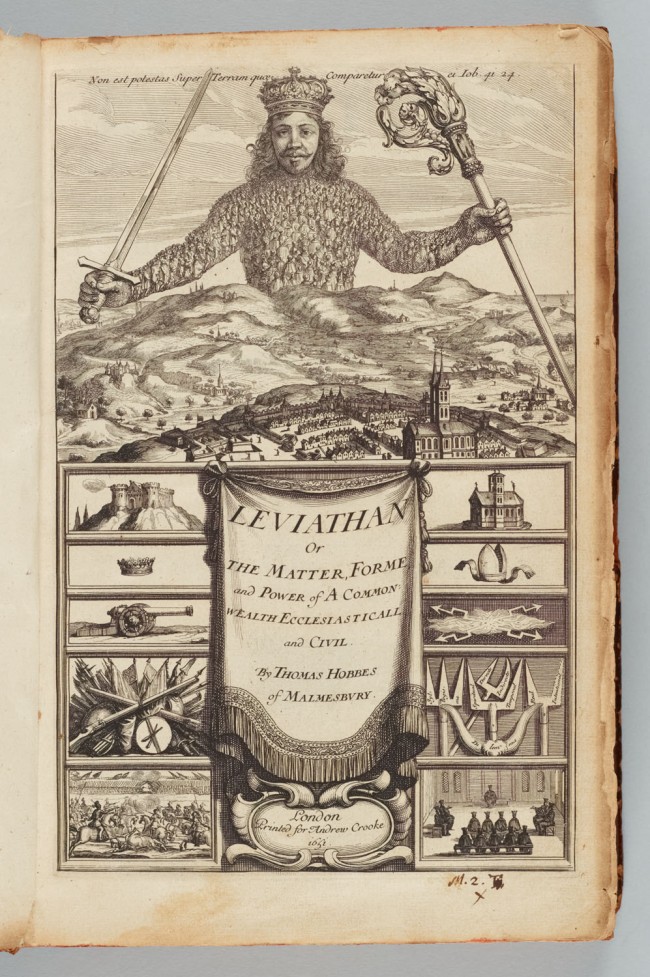 Political theory and philosophy often speak of the body politic as multiple, or as a composite being.  Thomas Hobbes’ Leviathan is, for IR, our most familiar image and idea of how multiple bodies form into larger bodies.  As Latour points out in the introduction to Making Things Public,  Hobbes Leviathan always included more than human bodies:

But in addition to the visual puzzle of assembling composite bodies, another puzzle should strike us in those engravings. A simple look at them clearly proves that the “Body Politik” is not only made of people! They are thick with things: clothes, a huge sword, immense castles, large cultivated fields, crowns, ships, cities and an immensely complex technology of gathering, meeting, cohabiting, enlarging, reducing, and focusing. In addition to the throng of little people summed up in the crowned head of the Leviathan, there are objects everywhere.

As Latour stresses, this political body is filled with actants (Latour’s word that blends and loses the so-called modern distinction between a subject and object).  Actants have varying degrees of “agency,”  but more importantly, it is the connections, or translations between actants and what assemblages these connections form, that shows the unfolding story of communal life.

To add to this busy and complex assemblages of actants, I throw in the human body itself as a microcosm of these same connections and entanglements.  The human microbiome, studied and understood anew through metagenomics, systems biology, and epigenetics, becomes a body multiple, too.

By way of example, bacteroides are commonly found in the human intestine where they have a symbiotic, or commensal, relationship with humans.  They aid in breaking down polysaccharides that the human body would not otherwise be able to process.  Fifteen to twenty percent of our daily caloric intake is absorbed in this manner.   There are new studies that suggest that gut microbiota both cause and can be the cure for autoimmune disorders like allergies and irritable bowel syndrome and, according to the Committee on Metagenomics,   “[T]hese functions are conducted within complex communities—intricate, balanced, and integrated entities that adapt swiftly and flexibly to environmental change.”.

Consider, again,  that the DNA of other life forms in our body outnumber us 10 to 1–many of these invisible to us up until recently. To take metagenomics and the microbiomes of the human body seriously means the human body becomes a community, not only a container–a “mutualistic human-microbial”  series of interactions.  Not only are we embedded in our environment, but our bodies are home to our own communities of micro flora and fauna.

If we extrapolate this to the macro level and the idea of the body politic, what can these commensal, host-guest relations teach us about human communities?  Writ large: The State as Person (the body politic) based on these lively human containers becomes dynamic, pluralistic, permeable, heterogeneous. This idea of composite bodies is nothing new, as we spoke above about Hobbes’ Leviathan, humans have imagined, and tried to create societies that respect diversity while securing freedom, but these diverse bodies may need decidedly different security regimes. Regimes that flow, and understand complex systems–both emergence and other perturbations in the system (noise, as Serres, said)– differently. The body and the body politic as a hybrid forum, a nested sets of complex permeable, rather than autonomous bodies need different security assemblages.  It certainly puts a different spin on issues such as immigration (immigrants and diseases are often linked), for example.  We always already are immigrants and guests and aliens, necessarily.  This is health, not sickness, in a body as multiplicity. Purity and isolation will slowly poison this body from the center out, like a closed petri dish.

The preservation of the body and the body politic has had multiple figurations–the state and nation, of course, looming the largest in this horizon of politics, but these figurations have never quite worked because few have quite captured the extent to which we are blended and imbricated with each other–both between and across species boundaries.  These leakages, or how these problems exceed the capacity of the sovereign state and the system of sovereign states,  are the problems of modern politics.  We can see them reflected in current debates in international politics like immigration, refugees, predator states, and climate change, to name but a few.  These may be more aptly defined as symptoms of a larger misunderstandings about how relationships are formed with multiple bodies coexisting in a mutual biosphere.

I have tried, from the perspective of the human body as understood through metagenomics, to show the similarities between relationships in the internal relations between members of microbiotic communities in the human gut and the relations between members of a political society. If, through research like this, we can no longer uphold the fiction of autonomous selfhood–a hard shelled container body that collides with other bodies and has clearly defined and rational interests (bring up biology and physics); what must that mean for institutions we “create in our own image?”

7 thoughts on “The Bodies Politic”