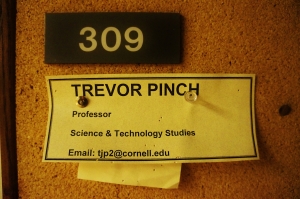 Just last week, I visited Cornell University to visit Trever Pinch, a well-known STSers from the early days. Trever has been an active member of the two most important professional association in STS, the Society for the Social Studies of Science and the European Association for the Study of Science and Technology.

While studies of 4S seem relatively rare, there was a recent (and interesting) project reviewing EASST, which is here: EASST_conf_summary. Still, a couple of older 4S programs are available on-line. In what appears to be Sal Restivo’s personal program from the first meeting at Cornell University in 1976, available here: 1976 4S at Cornell, we can see into STS’s past.

During the 1976 meeting, Bruno LaTour (sic!), for example, was still a member of the Salk Laboratories presenting on citation analysis, which would later be the groundwork for Laboratory Life (which, in the 1986 edition, as a great postscript). S. W. Woolgar was present to, at the time hailing from Brunel University, discussing sociological analyses of scientific accounts. H. M. Collins attended, speaking about replication in science, which, as many of you know, would be the work that Woolgar, along with his student Malcolm Ashmore, would later bring Collins to task on in Ashmore’s incredible (and incredibly playful) The Reflexivity Thesis (read the preface for a hilarious letter from Woolgar to the editor). R. K. Merton gave the lunch talk. Karen Knorr gave two talks and John Law gave one on Anomie(? Anybody know what happened to that paper? Maybe it’s sitting in an edited book nobody reads anymore…).

At any rate, as these are completed by my assistant, I’ll occasionally a comment or two.