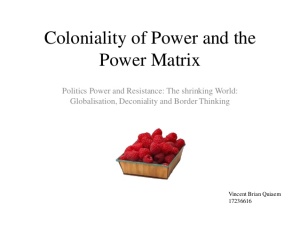 In contrast, coloniality is what Walter Mignolo refers to as the “darker side of modernity;” the idea that modern science, modern capitalism, belief in progress, gargantuan architectural and infrastructural advancements (the brighter side of modernity, one might say) all brought with them a few genuine liabilities such as major justifications for colonialism largely based on selective understandings of Europe’s “advanced place in history” and the advent of scientifically based racial hierarchies. Obviously, this dates as far back as the Renaissance.

Coloniality is a logic. We think and act through it; the logic is undergird. It lasts longer than the colonized peoples of a colonized nation are no longer colonized. It is a logic of many things, many things good and bad, for example, a logic of selective intervention, selective classification, de-personalized knowledge, and so on (this is quite complex, so, to those interested, this list will expand as you read more). The impact is long lasting, as well. When a panel of men determine women’s access to reproductive rights, we can see the logic — not in the outcome, but in the very existence of of such a panel being legitimate in the first place; we might say this is the colonization of reproduction (which is not to say that discussing women’s access to reproductive rights is wrongheaded, it is only to say that the idea of intervening into such matters for women or on behalf of women is perhaps not so legitimate as it may at first glance appear). Likewise, when poor individuals living in cramped urban environs, and the “right answer” is to start a war on poverty and intervene into the lives of people, build a massive public housing infrastructure and then step away from such matters, we might say that this is the colonization of poverty. This sort of coloniality is perhaps the most obvious when indigenous knowledge about the environment and nonhuman inhabitants comes into contact with outside forces like the state, for example, in this herring fishery controversy featuring fish, bears, aboriginal peoples, police at fishing docks, and more (one of the more difficult parts of this case is that the fishing industry is not pressing for fishing rights in these waters off of British Columbia and scientists seem to have heard and support local indigenous knowledge on the need to leave herring alone in these fragile waters). So, this is something of the lasting logic of coloniality as might be apparent even now in our postmodern times, and the pillars of science, the state, modern medicine, and the like help to produce the long-lived “colonial matrix of power” (along with all the distinctions Latour is happy to point out regarding the split between human and nonhuman, man and beast, culture and nature, and so on).

The goal of the decoloniality project (writ large) is to “de-link” from the colonial matrix of power by as many means as are possible, and so far, this has mainly implied decolonial thinking and doing (i.e., epistemology and political praxis, respectively). The goal is to identify “options confronting and delinking from […] the colonial matrix of power” (Mignolo 2011: xxvii).

This week, I (Nicholas Rowland), Stef Fishel, and Mary Mitchell, contributed to a panel session about decoloniality at the Eastern Sociological Society’s annual meeting (in good old New Amsterdam … er. New York). This week, we will be talking about the cases we shared at the conference to give readers a sense of what STS might be able to offer this line of research and research activism which largely comes from the non-Westernized world, the Global South, and academically speaking from the humanities. Also, we are deeply indebted to those who presented in the panel and specifically to Sabrina Weiss and Alexander Stingl for overseeing and organizing the panels!

*As you might note the wikipedia page for decoloniality is marked at the top by a message claiming that it is not balanced and fair by wikipedia’s standards. Given what has been discussed about the colonial matrix of power, this is both a cautionary thought and possibly evidence for the difficulties of de-linking from the colonial matrix of power (especially the critique that the piece is not neutral, with the implied message “it should be neutral,” given that neutral can be used precisely to neutralize political or radical ideas).