The notion of “post-crisis” that I opened-up this week with was meant to be a hard press against the post-crisis that I have often heard in discussions about “post-crisis economic planning” — that is, “after a crisis and now things are better” (which likely makes the likes of Naomi Klein retch, as Stef notes in her post). The notion that we are in a semi-permanent state of crisis raised to me the obvious question: does “crisis” really capture anything out of the ordinary? (and so have we exhausted the utility of such a concept?)

Our guest blogger this week, Peter Bratsis, offered a useful alternative to my question (or implied position). Crisis, he tell us, is not only some exceptional state of affairs; its original meaning implies, instead, that we have encountered a situation wherein a choice is required. It is a nice “intellectual chess move” (if you’ll permit the metaphor) because as Peter states in a comment “in both cases [my post-crisis or his original meaning of crisis] we need to intervene, some new activity from us is needed,” hence his dichotomy-laced subtitle “Repetition or Exception?”

Similarly, Stef offered another dichotomy, but in response to large-scale ecological crisis, namely, do we respond with “deep anger or a dull edge”? And so, yet another alternative read to the “semi-perpetual state of crisis” meaning of post-crisis is offered to readers (a rich week semantically, no doubt). Do we get into the sandbox with dark ecologists or muster Idle No More and sound the battle-cry?

Here is where I want to return to my original formula because while it does not capture the original meaning of crisis that Peter mentions and while it does not have near the elegant and immediate impact of Stef’s starving sea lions off of the shore of California, it does have at least one appreciable impact (as it might commonly be understood): 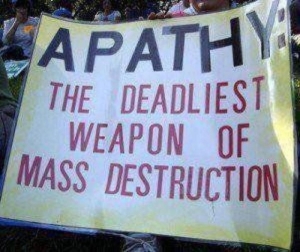 Living in a state of semi-permanent crisis can be construed as a license to do nothing. Fatigue sets-in. Apathy ensues. Inaction seems plausible. Not quite the economic or environmental equivalent of “compassion fatigue” or the obsolete term “battle fatigue.” Probably closer to “disaster fatigue;” the opening lines of the linked piece, which are telling, read: “The numbers are almost too large to fathom, so many stop trying.” Post-crisis, as a concept, might capture this sense of “crisis fatigue,” a kind of post-modern annoyance that I think many people would just prefer somehow go away. In so far as that is the case the term itself has become fatigued, possibly from overuse in the media (even though when it comes to looming economic and ecological crisis, I’m not sure how one could underscore “crisis” too much?).

This is just one example of crisis fatigue: contemporary events in Syria. Consider this from Aljazeera on Syria: John Kerry “we know that after a decade of conflict, the American people are tired of war. Believe me, I am too. But fatigue does not absolve us of our responsibility.” The piece shows how media attention over time reduces even as the body count does not. The perhaps adequate definition of “crisis fatigue” is “Crisis or compassion fatigue is the belief that that the public has become resistant to people who are suffering.” Cannot the same be said about Stef’s sea lions suffering on the shores of California? Cannot the same be said of concerns over “global warming”? Cannot the same be said, as Peter has, about Detroit or Greece?

These may be signs that no matter the definition of crisis being used — new or old — perhaps the public is growing fatigued, so that when presented with a time to “make a judgment” they have learned to take this cue as a moment to stall, perhaps reflect, but ultimately scroll to the next post on their Facebook feed…