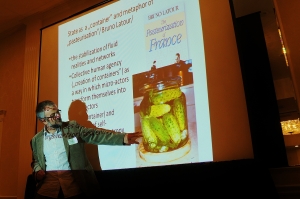 In this rather long post, Andrzej W. Nowak, now a guest blogger at Installing Order, asks whether or not we can collapse the boundary between information and structure. No doubt, given that these two terms mean so many different things depending on the tradition they are embedded within, this is bound to be a difficult task, which is why Andrzej is so careful to specify the unique traditions from which he hopes to, once and for all, decimate the boundary between information and structure. — Nicholas

Information as a Structure, Structure as Information. Power relation and dynamics of networks

To describe this perspective I will use a term ‘network ontology’. I propose that we can combine two traditions where the notion of network is used: Actor Network Theory (represented by Bruno Latour and others) and “new science of network” (represented by Duncan Watts and Laszlo-Albert Barabasi). I am absolutely aware that such a comparison might be perceived as controversial, mainly because these two traditions are very different. I know exactly that Bruno Latour himself reject such comparison. But I am bold enough not to be Latourian, but to go my own way.

I am also aware that, at first glance, in these two theories the very term “network” refers to completely different phenomena and, in fact, cannot be used interchangeably. This is reason I would like to ask, about possibility of comparison and mutual translation of these two ways of understanding of the notion “network”. Could such experiment help us in expanding our  view of network ontology? Material and ontological character of ANT gives us opportunity to show how information is structured and embodied in concrete world of things, objects, artifacts etc. “New Science of network” gives us rare opportunity to show dynamic process of self-organization (Novotny) and its consequences, also it is a  useful tool for analysis of power relation.

Information as a Structure. The notion of ‘Network’ in ANT

When we try to explicate the notion of ‘network’ in Actor–Network Theory we should remember that Latour himself is very skeptical about this notion. In “Actor Network and After”, he declared that there are four things wrong with actor-network theory: “actor”, “network”, “theory” and the hyphen. On the other hand, in Reassembling the Social: An Introduction to Actor-Network-Theory), he changes his opinion and accepts the wide use of the term . What worries Latour about the term ‘network’ is its common understanding that associates it with World Wide Web. In his opinion this association is misleading because it suggests that the actor (or information) is moving unchanged on the network. To avoid this misunderstanding, as we well know, he refers to a Deleuzian term ‘rhizome’. He follows McLuhan’s statement that “medium is a message” and claims that every single operation (all forms of communication, sending information, creating knowledge) is always a ontological operation. New network, new information is always connected with work which has to be done. There is no single bit of information which can be send without hidden work.

The terms ‘collectivity’, ‘network’ and ‘actant’ are in ANT all synonymous of complexity. I claim, that there is a set of particularly important problems that in fact haven’t been fully scrutinized in ANT. They include the problem of structure of the complex collectivity and its dynamics and also the question of the rule of affiliation and association of new elements. I want to suggest that despite all his declarations and promises Latour doesn’t fully recognize the significance of these problems.

At this point I think we should examine the second part of the title structure as information:

To analyze this we should consider holistic presumption which we often accept when we think about complex systems and with some controversy when we think about Latour’s assemblage. This is the most basic Aristotelian presumption that complex system is something more than just a sum of its parts. Accepting this we have to acknowledge a phenomenon of emergence. I want to claim that the phenomenon of emergence causes some theoretical problems to ANT and that it complicates its “flat” ontology.

In ANT new networks emerge out of the already existing ones. Networks are growing and expanding and are stabilized. But in my opinion, while Latour rightly emphasizes the role of humans and nonhumans as parts of collectivity, he also neglects the laws of collectivity. The result is that the problem of internal dynamics of the complex network system remains unresolved. Latour shows us clearly how actors/actants are or become networks. But he does not put the same emphasis on explaining how networks are or become independent actors. If actants and networks together create a whole, a collectivity, which is a complex system, then there should be new emergent laws which rule this collectivity. At first sight it could seem destructive to “flat” ontology and “ocasionallism” of ANT. However, I think it is possible to save this ontology if we decide to treat the emergent laws of collectivity and the laws of affiliation as actants.

There are many theories which deal with the problems of emergence and complex systems. I will refer here to ‘new’ Science of Network. It is a set of theories associated with works of Steven Strogatz, Duncan J. Watts and Albert-Laszlo Barabasi.

Social physicians (among them Watts and Barabasi) recognize the problem of nonhuman in commonsense way. Because they concentrate on social network their analysis overlooks very complicated relations between the realm of ‘the social’ and the realm of “objects”. But in my opinion this shortcoming can be overcome with the help of ANT understanding of materiality. Social physicians are more like scientists than sociologists. In their research they draw on mathematics and theoretical physics. However, I want to claim that their traditional, naïve vision of the relation between humans and non humans can be transformed in accordance with Actor Network Theory without significant changes in the core of their approach. There are some elements of Watts and Barabasi theories that support my claim – for example when they use the same mathematical tools to describe processes of synchronization in case of clapping hands or crickets chirping.

At first sight Barabasi and Watts are using the term social in a traditional way, but when we look closer at it we can discover that they have much more in common with ANT. Watts and Barabsi concentrate on a type of linking, connecting and assembling things. They try to explain this in a traditional language of “hidden” social force. But I suggest that in the very core of their approach they can be treated as a Tardian sociologist.

However, in my opinion if we want to reconcile Barabasi and Watts network science with ANT we have to deal with one more problem. It is a relation between an actor and a network. Barabasi and Watts are widely recognized as scientists whose research field is World Wide Web. As we remember Latour strongly opposes associating his notion of ‘network’ with the internet and WWW. But the theories of Strogatz, Watts and Barabasi on one hand and ANT on the other reveal many similarities when we look at them a little closer. Watts, Granovetter and Barabasi seem to differentiate between actor and network. But the analysis of synchronization of clapping hands or crickets chirping made by Watts shows clearly that there is no single traditional actor, like a single clapping person. Instead, it might be the laws that organize complicated networks that we may identify as actors. It turns out that one of the implications shared by both the network science and Actor Network Theory is that the agency is not only a consequence of network laws, but it is a network itself.

Now I want to show in what way ANT could benefit from the insights developed in network science.

First advantage is connected with the idea of ‘small world theory’ (Watts). When we analyze the hubs and connecteions  we can discover some other network laws governing power distribution within the network. Important hubs have tendency to become bigger and bigger and internal structure of the whole network is based on the existence of these hubs. But it means that the distribution of power within the network is very “unequal’ or “aristocratic”. It is desribed as a ‘power laws’ or – if we refer to Barabasi – by the term ‘free–scale networks’. (The phenomenon of ‘free-scale networks’ is often known as an 80/20 Pareto rule, or a Saint Mathew effect, etc.)

The highest-degree ‘nodes’ called ‘hubs’ play a significant role in the whole network. The most important and valuable insight of the network science is that the condition of having control over or influence on the network is the knowledge of the network’s structure. This knowledge must include the localization of clusters, cliques and – most of all – the position of ‘hubs’. It is only this knowledge that opens possibility to influence the network as a whole. In this context we can conclude that the structure itself is the information.

I wanted to show that incorporating ideas from network science into Actor Network Theory research program may seem to destroy simple and elegant “flat” ontology of ANT. I also wanted to show that if we want to compare the two network approaches (ANT and network science) we have to take up the problem of a growth of the network and of creation new macro actors. By referring to the ‘small world’ theory I wanted to show that the possible influence the actors may have on the network as a whole depends not only on their size but mainly on their localization in this network. As I mentioned before it is the hubs that concentrate the power in the network.

Network science and Actor Network Theory try to blur or invalidate the distinction between natural and social science, although they do this form opposite directions. I am strongly convinced that these two tradition should draw extensively from each other.

I would like to discus here, in public draft, some ideas which I get some time ago. I presented this ideas first time, in a paper at Wittgenstein Symposium (here).  Now I am working on a article about this topic (still in progres). Feel free to give me feedback and suggestions.