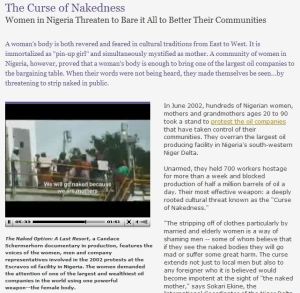 In this fascinating post, Andrzej Nowak, our friend and guest blogger for Installing Order, tackles a fascinating case of last resort for marginalized populations — the nakedness of their own bodies as a form of personal suffering and political protest. –Nicholas

Western feminism, especially connected liberal view is often quite paternalistic, when is speaking about women from Third World. Africa nations are our best example where colonial and post-colonial myths are still quite strong.

In particular, I would like to propose a short trip to West Africa. I am interest in very particular phenomenon – when naked body can be used as a tool of political action.

This phenomenon is sometimes called Anasyrma with reference to antic Greeks. But for me here more interesting is political use of so called “curse of nakedness”. Exposing of women naked body is, in West Africa, a strong political weapon, which can be used as a way to change course of politics.

It is interesting how body politic can literally be created out of naked bodies. Let’s look a little closer, what is this phenomenon:

We all come into the world through the vagina. By exposing the vagina, the women are saying: ‘We are hereby taking back the life we gave you,'” Turner says. “It’s about bringing forth life and denying life through social ostracism, which is a kind of social execution. Men who are exposed are viewed as dead. No one will cook for them, marry them, enter into any kind of contract with them or buy anything from them.

Very traditional cultural custom “Curse of nakedness” is often used as a  tool for political and economic  emancipation.

One of the best know example is a mobilization of women against Charles Taylor dictator of Nigeria. More details about this, You can find in this movie:

Other example is protest of Nigerian women against petrol companies in delta of Niger:

And another example from Ivory Coast, when political women bodies meet body politic with deadly result:

7 thoughts on “Politics of the naked body vs. the Body Politic”