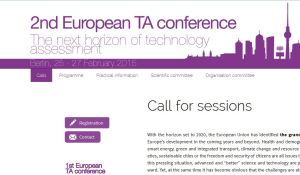 The overall aim of the conference is to take stock of and support the exchange on TA capacities throughout Europe. Following the successful meeting of researchers, TA practitioners, policy makers and civil society organizations at the 1st European TA Conference in Prague in March 2013 we look forward to continuing the fruitful discussions and networking at the 2nd European TA Conference in Berlin. The Conference is organized within the framework of the four-year FP7 project PACITA (“Parliaments and Civil Society in Technology Assessment”). Generally, the PACITA project and the Conference define “Technology Assessment” in a broad sense. TA comprises methods, practices and institutions for knowledge based policy making on issues involving science, technology and innovation, including TA-related fields such as Foresight, Science and Technology Studies (STS) and research on Ethical, Legal and Societal Aspects (ELSA) of science and technology.

We submitted and we’ll let you know if we get a spot (along with some invitations).

Here is our submission:

Session Title: The State as a Concept In Practice

If it is necessary to reflect upon concepts that support democratic problem solving and decision making, then no concept is more important or central to this aim than “the state.” Over the last decade, scholars in science and technology studies (STS) have developed an innovative and useful model for understanding the state. In particular, they show how the state is an academic concept — a theory, to be specific — that is used routinely in the everyday practices of contemporary politics. The concept is subtly transformed when it leaves the halls of academia and is then modelled for use in programmatic speeches or as a significant undergird for decision-making. Tracking how academic concepts get imported into political practices for the purpose of “doing politics” is a matter of considerable significance for scholars because it will reveal the “performativity” of political concepts. We know already that the relationship between academic concepts and their meaning(s) in practice is not a one-to-one relationship. How, when, and why the concepts transform in practice becomes the chief directing question for this new line of research. Rather than scholars endlessly debating the fineries of the state as a concept in the halls of higher education, we change the direction of debate so that scholars will study debates in halls of parliament, searching like archeologists for signs of our concepts in use. This will also require some study of where and how diplomats, ambassadors, and politicians are trained in academic settings and how the ideas that they learn migrate into the halls of government. This significant shift in studying politics transforms the traditional discussions of abstract concepts (such as the state) into something else entirely: abstract concepts become the practical fodder of contemporary politics.