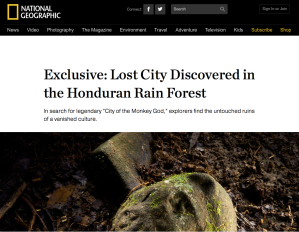 Story at The Guardian: “More than two dozen archaeologists and anthropologists have written an open letter of protest against the “sensationalisation” of their fields, with one accusing National Geographic of reverting to “a colonialist discourse” in announcing researchers had found two city-like sites in the deep jungles of Honduras.”

Should be interesting to see how this unfolds: “Open letter says announcement ignores decades of research and says of indigenous peoples there: ‘It is colonialist discourse which disrespects them’” (in the context of some recent discussion about coloniality and decoloniality on the blog).

Might be a good case study in the intersection of public understanding of science, media, and scientists (as the letter was written by archaeologists.