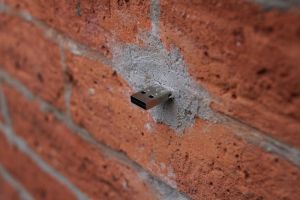 A friend recently turned me onto the idea that somebody, somewhere is embedding USB ports into infrastructure in various places around the world — like a treasure hunt (sometimes called a “USB dead drop“). Turns out that some of these early devices were embedded in 2010 by Berlin artist Aram Bartholl. There is even a manifesto — interesting, in my mind. This is part of, I think, the broader DIY culture, and, though it is dated, it is a bit cool.

The idea of inhabiting infrastructure like this — they claim that it is the data equivalent of geo-caching for P2P file sharing, but the implications are bigger — is not merely as an expression of “un-clouding data” or even DIY freedom (from the Borg); the promise of this sort of intervention into infrastructure is “enchantment.” I do mean this, in the Weberian sense of the word, although Weber mainly referred to rationalization and secularization in reference to their de-mystifying or “disenchanting” quality for our world.

The reason I bring this up is that I recently found a documentary film set in San Francisco called “The Institute.”

The film, for all its flaws, contains something I found powerful about engaging our infrastructure and intervening in it to produce enchantment out of the ordinary. Granted, it is like an artistic way to play in infrastructure, to transform the ordinary world. There is some promise, as idealistic as it might sound, in the logic of these USB dead drops for producing such an effect in our cityscapes. I get the feeling that university settings in urban areas could really make this work.

2 thoughts on “Infrastructure and Enchantment”