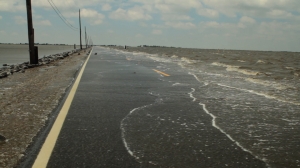 Cajun culture on the bayou in southern Louisiana is being eroded as the bayou beneath them erodes, by some estimates, a football field of land lost per day (BBC reports).

Costal restoration projects are planned long-term, over the next 50 or so years, with some palpable success. The BBC link above links Gulf oil exploration to the quickening of erosion, especially based on land mistreatment without recovery efforts. This Huffington post piece, “Oil and Cultural Genocide,” is a little less equivocal.

According to the BBC piece, another culprit is to be identified in the erosion of Cajun culture and that is the Mississippi River, in particular, the way that the mouth of the mighty Mississippi has been channelled and controlled as it flows into the Gulf. Previously, the logic goes, the Mississippi used to act like a giant land-making mud-hose spraying silt across the Bayou thereby rejuvenating the land; however, as the river became more controlled, this rejuvenating process slowed considerably, and in its place these massive land moving operations — featured in the costal restoration projects — took their place.

*The image above is from a great website about Isle de Jean Charles: http://www.isledejeancharles.com/environment

5 thoughts on “Louisiana Needs a Mud-Hose”