On Tuesday, India suffered the largest electrical blackout in history, affecting an area encompassing about 670 million people, or roughly 10 percent of the world’s population. Three of the country’s interconnected northern power grids collapsed for several hours, as blackouts extended almost 2,000 miles, from India’s eastern border with Myanmar to its western border with Pakistan. 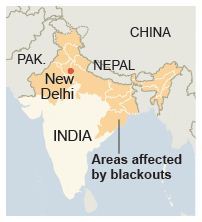 … Blackout Tuesday — which came only a day after another major power failure — was an embarrassing reminder of the intractable problems still plaguing India: inadequate infrastructure

Interestingly, the story is backdropped in the newspaper article by invoking both the economy and the state. Regarding the economy, India is presented as many of us think of them, as a rising economic power although one that has experienced some significant stumbling along the way. The state was also criticized for their role in the matter:

India’s coalition government, battered for its stewardship of a wobbling economy, again found itself on the defensive, as top ministers could not definitively explain what had caused the grid failure or why it had happened on consecutive days.

When the train system, which is one of the busiest systems in the world, according to the article, started posting across-the-board delays and cancellations, one citizen remarked:

“Now my pocket is empty,” she said. “I am hungry. I am tired. The government is responsible.”

Surendra Rao, formerly India’s top electricity regulator, said the national grid had a sophisticated system of circuit breakers that should have prevented such a blackout. But he attributed this week’s problems to the bureaucrats who control the system, saying that civil servants are beholden to elected state leaders who demand that more power be diverted to their regions — even if doing so threatens the stability of the national grid.

In the end, and this is an interesting remark for later theorizing; the following comment suggests that infrastructure sits at the boundary or can be positioned at the boundary between international and domestic affairs:

“India needs to stop strutting on the world stage like it’s a great power,” Mr. Guha said, “and focus on its deep problems within.”

2 thoughts on “Case in Infrastructure Failure”