In the New York Times this morning (September 9, 2013), a terrific article (written September 8, 2013) explores a development in China’s plans for urban development and the displacement of rural inhabitant. 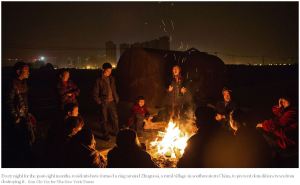 “Leaving the Land” is a new series in NYT, and “Articles in this series look at how China’s government-driven effort to push the population to towns and cities is reshaping a nation that for millenniums has been defined by its rural life”, which can also be read in Chinese, fittingly).

The third piece, “Picking Death Over Eviction,” explores rural resistance to government-based programs to urbanize rural citizens, including a graphic opening passage about a young woman who refuses to have her small shop removed by a demolition crew set to level it, drenches herself in diesel fuel and lights a match. According to the journalist, “Besides the self-immolations, farmers have killed themselves by other means to protest land expropriation.”

For STS scholars, the link between infrastructural expansion/transformation and social protest, the bread-and-butter of traditional/conventional sociology, seems like an obviously good research site for mutually beneficial scholarship, potentially even for those individuals being displaced through the advanced justification of infrastructural expansion … after all, it appears that this change is not poised to slow for many years: “In China, the timeline for moving 250 million rural residents into cities by 2025 is so rapid and far-reaching that it is raising concerns that some people will be left behind” … so, it is a sad, unfortunate case, but one rich for considering “infrastructural controversies” (controversies being a mainstay in STS) and “social protest” (protest being a mainstay in sociology).