My last post in December was a reflection on technology and politics.  How can we understand the connections between technology and politics, especially given that technology is generally understood as a tool of humans—either neutral as a mirror to our desires and interests, or as evil and uncontrollable progeny of humans as Creator? Think of the Cylons, Skynet, or Arnie as the Terminator. If politics and technology become entangled and rife with ethical issues and ontological angst at multiple levels what about bodies and technology?  What I think of as the “materiality of technology” is another topic that is buzzing through the webs this month….

Two things caught my attention along these lines: Oculus Rift and Google Glass.  Of course, neither of these wearable VR and computer platform, respectively, are new this month, but there has been some heavy rotation on the interwebs.  I guess I could add that I suspect the new Spike Jonze film “Her” has brought quite a few of the underlying issues about technology and our relations with technology to the surface.  Sexuality and intimacy and how they are enhanced or stymied by our tech are always top concerns.  Rightly so, of course, as more often than not plain old low (or old) technology comes along with them: misogyny, racism, sexism, criminality, etc. More broadly, the discussion in the case of “Her” has centered on our need to sexualize technology, to “weirdly” sexualize: is it “homage to form” when we assign inanimate objects gender stereotypes–as Isha Aran points out in her Jezebel essay–or a more disturbing and continuing desire to objectify and create subservient subjectivity for women?

Somewhat counterintuitively, I think that the two products above incorporate a need to both remove material barriers to our technology while creating new ways to materialize, or sexualize, this technology.  Ultimately, it may be more about sensualizing our experiences with technology, not necessarily sexualizing them.  They seem to represent a deep desire to remove “things” from between our bodies and our computers and information (mouse control, monitors, keyboards—ways of externally interacting with computers) with intuitive body controls. Think Robert Downey Jr. in Ironman (watch this) or Tom Cruise in Minority Report (2002). The drive is to interact with our information in radical new ways–in ways that mimic how we manipulate “things” in the world. 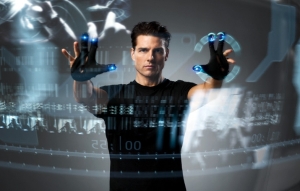 Minority Report (2002) 20th Century Fox/Dreamworks Pictures (Remember how this movie blew our minds?  Especially when we found out that this was all kinda old tech?  And now we don’t need those silly gloves.)

This is added to an anxiety that technology is altering or complicating or potentially harming our relationships with others and ourselves.  While we want technology to operate seamlessly, we are wary of its possible pernicious effects.  This is not necessarily unfounded from a bodily point of view.  We are mammals; we need contact with other mammals to mature correctly and to be happy and healthy. Babies need skin-to-skin contact and the elderly who live with a partner, or dogs and cats, tend to live longer than those who live alone. This is not necessarily reductionist thinking, just a biological understanding of limbic connections. Ultimately, we are pack animals. Playing WoW all night and day might be unhealthy for lots of reasons—many of which aren’t necessarily the fault of technology.  Isolationist behavior in any form tends to be damaging if taken to an extreme.  This brings up the other reason I chose these two examples: another impulse that wants to use this wearable tech and less interface to share and swap experiences with others for greater understanding of perspectives other than our own.  To be able to see into the pot and past the steam, as Wittgenstein wrote, of another’s mysterious inner world.

More specifically, I want to discuss two applications of Google Glass and Oculus Rift, and in one case, a hack of these two pieces of technology. Let’s return to firstly to Google Glass.  These are wearable google interfaces to simplify your interaction with information and devices; they are wearable smartphones.  They allow a user to move away from a screen and use the technology without breaking contact with the “real” world.

Sex with Google Glass is a recent app created that allows the wearer to watch and record sex from various angles.The wearer can also sync the glasses with lighting, music and to the Kama Sutra for “ideas”, for example.  It is private and all recordings are deleted after five hours.  Although Google has a strict anti-porn standing, this isn’t exactly watching porn–it’s sharing in its creation, perhaps? Sex with Glass can also allow couples to trade places and see what the other is experiencing.

This brings us  to Oculus Rift.  These are virtual reality goggles, originally funded through Kickstarter, and just out with the “Crystal Cove” prototype.  This prototype is the latest in immersive gaming and virtual experiences. 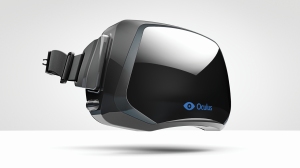 BeAnother Lab is using the Rift to allow users to experience what it’s like to swap genders, to investigate embodiment, and issues like “Gender Identity, Queer Theory, feminist technoscience, Intimacy and Mutual Respect.” This is part of the The Machine to Be Another Project.  From the website:

More than individuals, we are part of a social collective called humanity. As members of this collective, the perception of our own identity is based on our relation with other people and our social environment: how people see us, how we do act and interact with them, and what self image we project to this society and to ourselves. As part of this collective society, it is clear the importance of understanding the ‘Other’ and ‘Each Other’ to better understand ourselves. This artistic investigation plans to use the recent neuroscience approach of ‘embodiment’ and apply it to investigate the perception and comprehension about the Self based on the comprehension of the “Other”.

While I am not enough of a tech follower to have an educated opinion on the specs and lifespan of these platforms,  what I find most intriguing are these examples of the application of these products.  They seem to be highlighting the desire to be able to experience what another sees and feels; to see through their eyes.  This is an interesting empathic impulse for tech and one that bears further watching and investigation.  If technology is never neutral, as I argued, in the last post, what are the opportunities we have for freedom and ethics within this medium?  If the medium is the message, how do these applications transform the material world?

For those thinking about “ding politik”…next time… the Internet of Things. A future where everything will have an IP.

38 thoughts on “Empathy for the Other through wearable tech?”