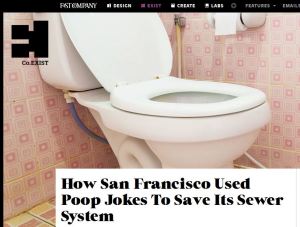 On a Monday evening back last May, at the intersection of 2nd Avenue and Lake Street in San Francisco’s Richmond district, the earth opened up. A giant sinkhole–about 20 feet across and nearly 10 feet deep–suddenly gaped in the middle of the road. But the culprit wasn’t an earthquake or a creature from the deep. It was just an ancient sewer line, finally giving way after more than a century of decay.

A few months later, some odd advertisements began popping up. A set of unusual slogans suddenly plastered the backs of buses, Facebook and Twitter timelines, and in newspapers across the city, making residents double-take on their morning commutes. The ads read things like No One Deals With More Crap Than I Do and Your #2 Is My #1

This is a great idea; simply wonderful. It underscores the significance of the problem and does it with a lighthearted approach. A truly fresh idea to a serious problem. According to the FactCompany write-up,

The real punch-line, however, was that these ads came not from a newly minted, investor-backed fertilizer startup, but from the San Francisco Public Utilities Commission (SFPUC), a government agency with a tight budget and an unattractive but vital job to do.

There are more infrastructure jokes, although none so useful as San Fran’s, like this predictable one about government spending, this one that is a bit sexist about a bridge to Hawaii, or this one about IT servers. However, when you search for “infrastructure joke” you will also find these blogs indicating that crumbling and failing infrastructure is, in fact, no joke, a cruel joke, or … <choke> “snow joke” in times of in-climate weather.