Inspired by Jérôme Denis‘s comments/posts on Latour’s play honoring Michel Callon, I tried to think back to an idea I recently read about out of Australia about robots and art, which might be of interests to STSers and those of us (like me) who have a background and/or interest in art and museums.

So, ever heard of “robotic humanities”? Me neither, at least, not until reading this blog entry on the term’s potential origins with Chris Chesher (Australian Centre for Field Robotics at the University of Sydney).

The motivation for mobilising the term ‘Robotic Humanities’ was an invitation to speak at an event ‘Digital Editing, Digital Humanities’, organised by Mark Byron, a colleague in the English Department. Digital Humanities is a relatively new name for an expanded version of quite an old tradition of using digital technologies in literary scholarship. Such work includes literary scholars analysing stylistic patterns algorithmically to discover patterns in the words in a certain author’s work. Others scan in notebooks of great writers, marking up the author’s corrections and annotations to create digital editions. The best of this work finds biographical and creative insights through this process. For example, Margaret Webby presented an analysis of Patrick White’s notebooks to show a direct link between White’s criticisms on seeing Ray Lawler’s play Summer of the Seventeenth Doll (which he describes as banal) and new confronting scenes he wrote for his own play The Ham Funeral.

His slide show also has a few provocative slides, perhaps none more so than the (11th) slide on the “fish-bird” exhibit wherein two robot-wheelchairs “communicate” or “interact” with one another and visitors through controlled movements and the presentation of written materials. 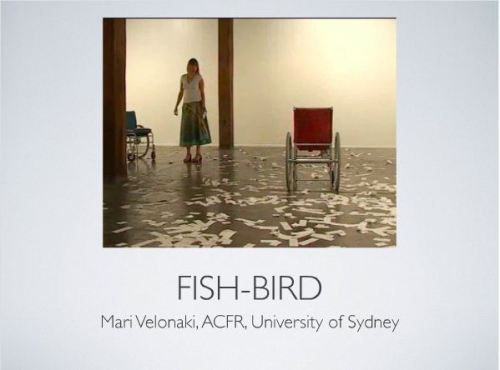 Read about it here in a paper by David Rye, Mari Velonaki, Stefan Williams, and Steven Scheding (all at the ARC Centre of Excellence for Autonomous Systems, Australian Centre for Field Robotics, The University of Sydney). Although the interplay between art and robotics is by no means new, this exhibit struck me.

Anybody know when/where the first art/robotics show took place/showcased? Or, for that matter, good materials on the interplay between art and technology OR art and STS?