I was in Anapolis, MD, last weekend and saw something that I thought was a bit odd (above): disaster art. At first, I was stunned; how could a place celebrate (but potentially profit) from local disasters? How would that appeal to tourists? In this case, of course, its an image of flooding after a hurricane where the infrastructure of the harbor is damaged and, in may cases, submerged.

“Why would folks want pictures of broken infrastructure?” I thought. And that’s when my art history training came in and I had a “duh” moment. Disaster art — fictional and non-fictional — has been common for centuries. See, for example, this blog post about sunken ships or this one featuring a number of examples of fictional disaster art.This pintrest board sums it up nicely, saying disaster begets creativity, and includes a number of other obvious pieces of this puzzle like disaster memorials and post-disaster reassembly work like art from tsunami rubble in Japan. I’d also be remiss not to include the massive amount of disaster art in video games, for example, post-apocalyptic games like the Fallout (below), Gears of War, or Halo series. 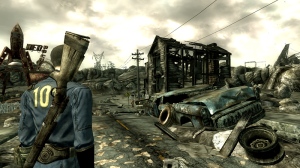 Still, people’s love for depicting ruins is far older than all that. I’m thinking, in particular, of the many depictions — often with a romantic feel — of derelict Greek temples or statues like this image (contemporary, lame, background wallpaper) or this painting of the Colosseum (from the second half of 17th century).

Seems we love our ruins, after all.