Harvey on the end of capitalism (again) 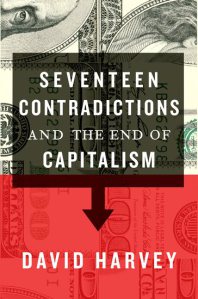 Introducing his interview with David Harvey at the Chronicle of Higher Education earlier this week, Scott Carlson notes that

‘The American stage has recently been set for questioning capitalism, with the U.S. tour of academe’s rock star of the moment, Thomas Piketty. The French economist’s Capital in the Twenty-First Century has highlighted capitalism’s drift toward inequality and criticized economists’ focus on pure theory.’

The interview was prompted by the publication of David’s latest book, Seventeen contradictions and the end of capitalism: see also this interview with Jonathan Derbyshirehere.  En route, David has good things to say about Piketty’s project – its empirical detail, its humanistic flourishes (see also Paul Krugmanhere) – but he is evidently dissatisfied with its analytical and, in consequence, its political reach.

Since he spoke to the Chronicle, David has fleshed out his critique of Piketty here.