In a recent post on “Understanding Society”, Daniel Little discussed some recent development in the philosophy of social science: Analytic Sociology, Critical Realism and Actor-Network Theory. Here is how it goes: 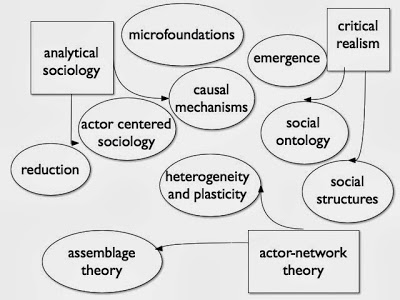 Start with a few resonances between ANT and CR. Both are grounded in a philosophical system (Deleuze, Kant), and they both make use of philosophical arguments to arrive at substantive conclusions. (…) But a point of contrast is pervasive: CR is realist, and ANT is constructionist.

(…) The anti-philosophical bent of AS makes it difficult for AS scholars to read and benefit from the writings of ANT scholars (witness, for example, Hedstrom’s dismissal of Bourdieu). The model of explanation that is presupposed by AS — demonstration of how higher-level entities are given their properties by the intentional actions of individuals — is explicitly rejected by ANT. (…)

Finally, what about the relation between AS and CR? On the issue of causation there is a degree of separation — AS favors causal mechanisms, preferably grounded in the level of individuals, whereas CR favors causal powers at all levels. (…) But here there is perhaps room for a degree of accommodation, if CR scholars can be persuaded of the idea of relative explanatory autonomy advocated elsewhere here.

via Understanding Society: How do the poles of current PSS interact?.

Somehow I felt a bit like I was suddenly in an academic version of an episode of Doctor Who, jumping back in time, stranded in 1992. In a paper that came out in parallel to the well know “Chicken Debate” (Collins/Yearly 1992; Latour/Callon 1992), but that was burried in a edited volume (McMullin 1992), Latour moved ANT explicitly away from what until then was called the “Social Studies of Science” and towards a framework to deal with the moderns. He wrote:

“A radical is someone who claims that scientific knowledge is entirely constructed ‘out of’ social relations; a progressist is someone who would say that it is ‘partially’ constructed out of social relations but that nature somehow ‘leaks in’ at the end. (…) a reactionary is someone who would claim science becomes really scientific only when it finally sheds any trace of social construction; while a conservative would say that although science escapes from society there are still factors from society that ‘leak in’ and influence its developmentIn the middle, would be the marsh of wishy-washy scholars who add a little bit of nature to a little bit of society and shun the two extremes.(…)” (Latour 1992: 277)

Hmmm. Maybe it is not Doctor Who, maybe it is Groundhog Day and we are just waking up again at 6:00 to the voices of Sonny and Cher. Do we really have to have the same debate again, now not in the philosophy of science but the philosophy of social science? Maybe there is a reason to do that – after all, Phil Connors has to repeat his morning routine over and over again until he starts making himself a better man and finally finds a way to love and happiness. After all, Little does indeed think it is important to add “ANT to the menu for the philosophy of social science, at least as a condiment if not the main course” and there are others in that field today that share his opinion. Maybe if we don´t discuss those issues again and try to work diplomatically with the moderns (in this case: AS and CR…) on what they value most, we are selfish and grumpy fools – like the character that Bill Murray played so beautifully. But it is not tempting to know that the sound of “I got you babe” will be with us for a while. Is there a way out? A shortcut? A “shift to other games”?