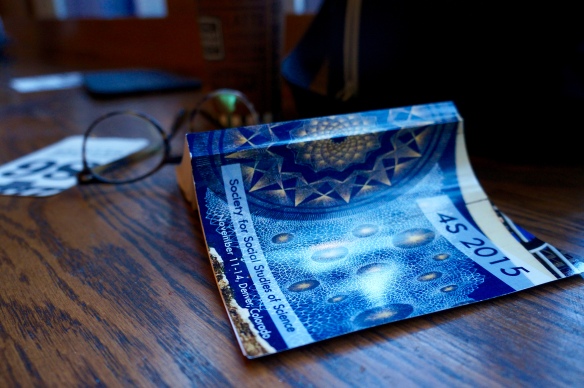 4S 2015 Denver is our (Jan-H and I’s) presentation from, unsurprisingly, 4S 2015 (Denver), wherein we reflect on the trends and recurrent themes in our five years of organizing panels around STS, governance, and the state, which we are now calling simply “Social Studies of Politics.” We have a chapter summarizing a bit of this in “Knowing Governance,” but the paywall is steep, steep!

We introduced Peer back in March … well, his paper presented in last year’s 4S meeting at the Copenhagen Business School (and subsequent ISA meeting at London School of Economics) is now in press!

Check it out; its an alternative answer to traditional interpretations of “failed states” in conventional IR research, and, of course, the alternative to orthodox social contract theory appears to be ANT (or, at minimum, ANT can draw our attention to alternative explanations … or, better yet, help us to understand the infrastructural underpinnings that make explanations possible, like those used by our friends in social contract theory [although their friendships seem oddly contractual]).

Oh, he even mentions as much in the acknowledgements:

Further thanks to the following people for comments on a previous draft of this article:the editors Graham Harman, Maximilian Mayer, the participants in the panelOn States, Stateness,and STS: government(ality) with a small “g”?, Society for Social Studies of Science & European Association for the Study of Science and Technology Annual Conference, Copenhagen, October17-20 2012, and participants in the Millennium/Theory Talks workshop at the Millennium Annual Conference, London, October 20–22 2012.