Review of Casey O’Donnell‘s Developer’s Dilemma, which is in a similar vein as Ian Bogost’s Doing Things with Video Games and Nathan Altice’s I AM ERROR. 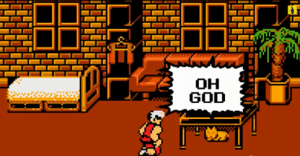 Grammatology explained with video games and a cat — not bad!

What do video games do?

After our friend, Dmfant, posted about Ian Bogost who keynotes the 10th Anniversary Games for Change Festival.

I have recently reviewed How to do things with Videogames  (by Ian Bogost (Professor of Digital Media, Georgia Institute of Technology) Minneapolis / London: University of Minnesota Press, 2011, 180 pages, ISBN 081667647X). There is a copy of the book on-line here.

Here are some excerpts if you’re curious about the topic or the book.

One the one hand, it was oddly satisfying to read research about video games that was not mired in the woefully lame “do they cause violence?” trope. In contrast, Ian Bogost in How to Do Things with VideoGames shows how videogames have transformed society, arguing that games have shaped, in meaningful ways, essential facets of social life, ranging from exercise and relaxation to politics, travel, and photography.

On the other hand, we all had the nagging feeling, while reading this otherwise fine book, that games – not videogames, specifically, but just games, generally, of which videogames are just one branch – are nothing at all new. When we step back and consider whether or not games have changed art or relaxation – or, more realistically, how games and society are a dynamic mutually shaping state of co-constitution – the question seems … well, silly. No doubt, games shape society and society shapes games … of course.

In general, the book was a fun and quick read; much like a video game itself. For scholars, however, here is the bottom-line:

where does this book fit on the library shelf? His past and future works hold together nicely. In Bogost’s 2006 Unit Operations, he shows us that games should be analyzed using the same techniques we would use to criticize architecture, a poem, or a sunset as a means to keep “game studies” from being ghettoized in the larger academic discussion of the role of games in our information society. His 2007 book Persuasive Games offers us an example of exactly what games can do: persuade; Bogost shows that games contain all manner of persuasive rhetoric, which has long-term potential to change the shape of society. Those two titles laid a solid groundwork for How To Do Things With Videogames and make the title more understandable once put in the context of his previous work. The shift in grammar – from “doing” to “how to do” – is anything but subtle, but rather than talk about video games – critiquing or lauding – this book is about what to do with them, and where, and the answer to the “where” question is, more or less, “anywhere and everywhere.” If Bogost gets his way, terms like “gamers” will be so ubiquitous as to hardly capture anything at all meaningful, and, instead, video games will take their rightful place at the center of popular culture (so long as Bogost is there to hold them up). In Bogost’s 2012 Alien Phenomenology, or What It’s Like to Be a Thing – his most intense work to date –shifts readers away from doing things with games and toward trying to understand how things, such as games, are.