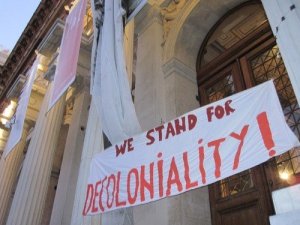 CONFERENCE OPPORTUNITY: Decolonialty mini-conference (9 panels) at the Eastern Sociological Society Meeting, Boston March 17-20, 2015. Panels on a number of topics including “Decoloniality and the State” and “Beyond the ‘Human'”. If you do non-human/post-human, postmodern state theory or state modeling, and can connect to decolonial options/epistemic disobedience get in touch asap (submission is on Oct 30) (write me at: njr12@psu.edu).

We are happy to host newcomers to decoloniality as well as seasoned/experienced scholars. Please consider this an open invitation to join the important discussion about decoloniality and the social sciences. There may also be opportunities to Skype into the meeting so please do keep that in mind. 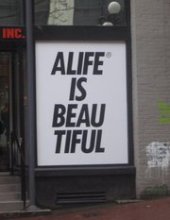 Over the next month, I will share research from my book in progress, New Metaphors for Global Living. This research, through the hermeneutic potential of the life sciences and the theoretical insights of science, technology and society studies (STS) and new materialism, gestures toward an idea of connectedness of diverse bodies that broadens understandings of relationality, both as bodies in states, and as states in the international community. Specifically, I borrow genomic and immunological theory, as understood by new scientific research, to argue that heterogeneity is the condition of possibility for the production of new subjectivities and communities.  This is applied through metaphorical frames like the body politic and biomimicry.

A specific and central aim of this research is to apply sustained critical pressure to the individual and the state as currently defined in International Relations.  To aid in this critique, I create an analytical structure able to identify and celebrate plurality without erasing internal diversity, or coding the external as strange and dangerous to a perceived unity within.  I propose a pair of novel metaphorical framings to build a different conception of humanity’s myriad ties to world: Lively vessels and contaminated states provide new metaphors named for the processes that intertwine multiple bodies into composite ones.   These metaphorical conceits recognize that human agency is part of an assemblage of multiple actors, and called attention to the nonhuman beings that aid in keeping the human body, and its biosphere, alive.

International Relations joins in the dialogue between bodies and science by bringing the latter half its title to bear on the discussion: “relations” trumps the “inter-national” through the body politic as a nested set of permeable bodies rather than hard-shelled nation-states competing in anarchical conditions ruled by fear and exclusion. These metaphorical techniques, aided by STS and new materialism, create a language to discuss the processes that intertwine multiple bodies, both the social and the political.  It is crucial to rethink the politics that follow from these entanglements. The question then becomes: What kind of life is possible—what kind of body politic is needed—if we think about “nestedness” and symbiosis rather than exclusion, competition, and purity?